hide Would you like to visit our mobile site? 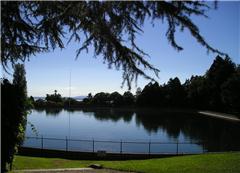 Centrally located on Seattle's Capitol Hill, Volunteer Park is often referred to as the crown jewel of Seattle’s Olmsted Brothers Park & Boulevard system, as its most complete and best-preserved Olmsted-designed park. The plan incorporated one of Seattle’s first municipal reservoirs to create an axial vista toward city, water and mountains.

Centrally located on Seattle's Capitol Hill, Volunteer Park is often referred to as the crown jewel of Seattle’s Olmsted Brothers Park & Boulevard system, as its most complete and best-preserved Olmsted-designed park. The plan incorporated one of Seattle’s first municipal reservoirs to create an axial vista toward city, water and mountains. A cross axis follows the ridgeline, terminating in a brick water / observation tower and a small conservatory. Formal elements are surrounded by linked greenswards and groves in the naturalistic/picturesque style closely associated with the Olmsted firm. Tennis courts, outdoor stage, relocated play area and the art museum are later additions.

In 1876, Seattle purchased 40 acres on Capitol Hill, then far from downtown. By 1885, the land was used as a cemetery, then converted to park use in 1887, when burials were relocated to the adjoining Masonic (now Lake View) Cemetery. Originally named Lake View Park, then City Park, Volunteer Park was given its current name in 1901 in commemoration of Spanish-American War veterans. Eight additional acres were subsequently added to the southwest corner of the park. The Volunteer Park reservoir was completed and opened in 1901.

In the center of the nearly square park, the Concourse forms an active promenade along the ridge top between the Water Tower and the Conservatory, flanked by an allée of Horse chestnut trees. This hilltop axis continues south from the Water Tower into the Capitol Hill neighborhood as 14th Avenue East, once called “Millionaire’s Row” for its opulent mansions. A perpendicular view axis runs west from the museum (site of the original pergola) across the reservoir to the city and mountains beyond. Along this view axis, the formal landscape descends in symmetrical terraces from the Concourse to the reservoir. A winding carriage drive traverses the sloping western half of the park.

In addition to its prominent reservoir and water tower, park structures include the Seattle Asian Art Museum (1931-1932), Conservatory (1912), lily ponds, tennis courts, a shelter house, a wading pool, a modern play area and several monuments and sculptures. Areas intended for crowds and social interaction are centralized and treated in a more structured and formal manner than the greener park periphery. The Olmsteds intended that nothing man-made dominate the park’s beautiful, refreshing landscape setting. No building was to detract from visitors’ enjoyment of nature.

In their 1903 report to the Seattle Board of Parks Commissioners, the Olmsted Brothers proposed extensive improvements to the earlier park design by Parks Superintendent E.O. Schwagerl. John Charles Olmsted’s design incorporated the reservoir as a prominent visual feature, and promoted construction of the rusticated observation deck-topped water tower, completed in 1908. Design drawings were developed from 1904 to 1910 and comprise the most complete set of Olmsted Brothers’ plans for any of Seattle’s parks and boulevards.

Few substantive changes to Volunteer Park have occurred since 1975, when it was listed in the National Register of Historic Places and more recently as a City landmark. The most notable alteration was in 1931 when the Olmstedl pergola and concert grove was replaced by the Seattle Art Museum, which has had multiple subsequent additions diminishing the park’s east greensward.

As a whole, the park retains an overall integrity of location, design, setting, materials, workmanship, feeling, and association. Volunteer Park is remarkably well-preserved a century after its construction.

A federal-mandate to cover or decommission urban reservoirs will affect the park’s most iconic feature in coming years. Landmark status should accord it some protection from inappropriate alterations.

To additional plans & images for this project:

To other digital collections:

The Cultural Landscape Foundation - What's Out There